THE ROLE OF MASS MEDIA IN PREVENTING ELECTION RIGGING IN NIGERIA

Muhammed, (2007) describes election rigging is a criminal conduct of subverting an entire electoral process through massive organized fraud with the active participation of officials of the electoral body. Election rigging takes place in three phases: before, during and after elections.

Experience has shown that rigging can take many forms. It could be by stuffing of the ballot box with fake ballot papers before the election day or on the election day, falsification of results and forgery of figures both at polling units and collation centers, voting by unregistered person and publication of false statement of the withdrawal of a candidate.

Constructive ways of rigging elections include creating artificial scarcity of ballot papers in “safe” polling booths of the opponents, diversion or snatching of ballot boxes between polling booths and counting centers and abduction of returning officers. All these actions are usually perpetrated for gratification.

He added that rigging an election remains the single most incendiary malpractice that can easily throw the entire election process into violent upheaval. In Nigeria’s experience, there were occasions when announcement revealed as winners candidates completely outside the expectations of the majority of the electorate.

In the same vein, mass media play a crucial role in fostering an environment of good governance and political awareness in society. As the watchdog and interpreter of public issues and events, the media has a special role in every society. In information-based society; the media have a disproportionately visible and influential role says International Foundation for Election Systems, (2011).

IFES (2011) added that democracy cannot exist in the absence of the press. This is because democracy is based on popular will and popular opinion depends on the public’s awareness and knowledge. It is the mass media that brings up, promotes and propagates public awareness.

Fischer, (2002) says the main responsibility of the press is to provide comprehensive, analytical and factual news and opinion to the people on everyday issues and events of popular concern. To fulfill its duty and responsibility, the press must work according to the fundamental principles of professional ethics, as well as norms and values of journalism.

Goodman, (2010) opines that democracy can neither be sustainable nor strong without a free press. On the other hand, press freedom will not be possible without democracy. Therefore, the mass media and journalists must be committed to democracy. For this, the press must be perpetually involved in the establishment and promotion of a democratic culture.

Held, (2006) also observes the fact that access to information is a citizen’s right and must be taken to heart, and information must be presented in a simple and palatable manner. Right to information is inherent in democratic functioning and a pre-condition for good governance and the realization of all other human rights, including education and health care.

The main objectives should be the promotion of transparency and accountability in governance so as to minimize corruption and inefficiency in public office and to ensure the public’s participation in governance and decision making.

Media must be credible and trustworthy. Trust is the most valuable asset for any media. Once lost, it cannot be earned back. It is for this reason that all media must uphold their principles to provide accurate and factual news and other programmes.

Jones, (2001). Press must understand the difference between politics in general and party politics. Media should not be a vehicle, or used as an advocate for any political party or ideology.

Media plays the role of watch-dog in reporting corruption, complacency and negligence. In a changing, competitive landscape, compliance to good governance has never been taken so seriously, as people demand more transparency from both the government and private sectors. 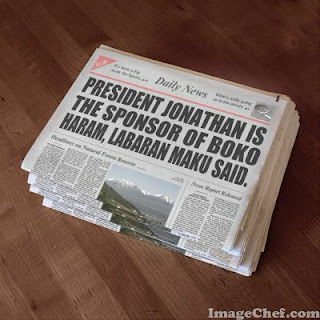